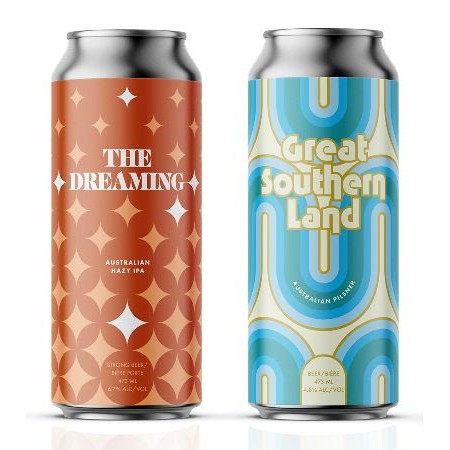 CALGARY, AB – Cabin Brewing has announced the release of two new beers with an Aussie twist.

The Dreaming Australian Hazy IPA (6.7% abv) is described as follows:

Close your eyes and dream of a land so vast and great and rich in culture you can lose yourself in it for weeks at a time. The Dreamtime is the foundation of Aboriginal religion and culture in Australia. It is the story of events that have happened, how the universe came to be, how human beings were created and how their Creator intended for humans to function within the world as they knew it. For our Australian-hopped hazy IPA, The Dreaming, we leaned into the ethereal qualities of this mystical land. Galaxy, Enigma and Vic Secret hops have been layered in tropical abundance, behind a smooth and full-bodied malt base. Unlike most hazy beers, we used no wheat and oats – just 2-row malt, flaked barley and victory malt. And it’s just how it was meant to be.

Galaxy is the shining star of Aussie’s stellar hop lineup, with bright tropical fruit notes of passionfruit, citrus and peach. If Galaxy hops grew in your backyard, you’d throw them at everything too. It’s one of our personal faves. Our Australian pilsner, hopped exclusively with Galaxy, is made for drinking in the sun. Light. Bright. Crisp. Refreshing. Delicate. And an aroma that keeps on going, like the vast expanse of Australia’s land and sea. Get this one down ya, mate. It’s a beauty.

Both beers can be ordered now for pick-up at the brewery or delivery in Calgary while supplies last.