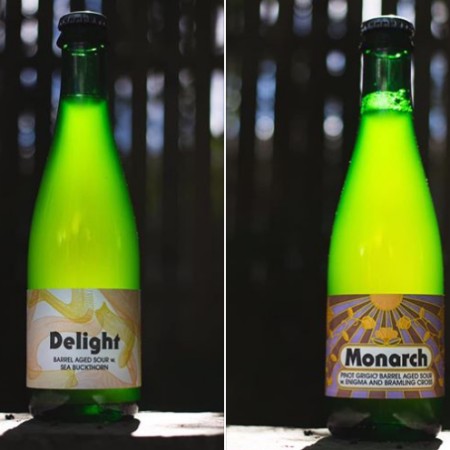 Delight (5.6% abv) is a blended barrel-aged sour with sea buckthorn:

A couple different base beers went into this creation. One part light hoppy base beer with 100% German heirloom pilsner malt, aged about 18 months in ex sauv blanc barrels with a host of different brett, sacch, lacto and pedio cultures; and another part low IBU golden sour base aged for about a year in neutral ex-wine barrels. After aging, these beers were conditioned on cold pressed sea buckthorn juice from New Brunswick, and dry hopped with aged noble hops before packaging and bottle conditioning for about 2 months. ⁣ Zero head retention thanks to sea buckthorn’s natural oils. Pineapple, fuzzy peaches, mango, and a firm minerality. Freezing rain on a white sandy beach.⁣

Monarch (5.5% abv) is a dry-hopped sour aged in a Pinot Grigio barrel:

Golden sour base beer, conditioned for about 7 months in freshly emptied Pinot Grigio barrels then dry hopped generously with Enigma and Bramling Cross hops. Bottle conditioned for about 2 months.⁣ Honeysuckle, grape crush, white nectarine, wet river stones. If purple had a flavour, this would be it… which is weird because Pinot Grigio is a white grape. I’m just a brewer, not a vintner.

Both beers are available now in the 2 Crows retail shop, and online store while supplies last.