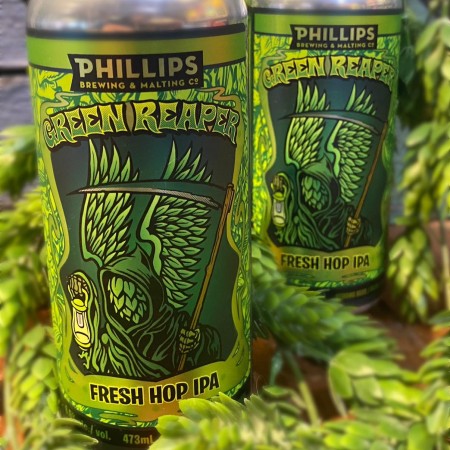 Green Reaper Fresh Hop IPA (6.5% abv) debuted in 2012 in a version made using freshly harvested Williamette hops, and subsequent editions have featured other varieties based on availability and quality. This year’s vintage is described as follows:

This year’s edition of Green Reaper features freshly picked Comet hops from the Bredenhof Hop Farm in the Fraser Valley. After these fresh hops are picked, they head straight to the kettle within 24hrs to produce the beautiful aromatic floral notes these fresh hopped brews are renowned for. We opted for a West Coast IPA malt base then fully conditioned this brew to let the grapefruit and pine flavours and old-school earthy bitterness of the Comet hops shine through.