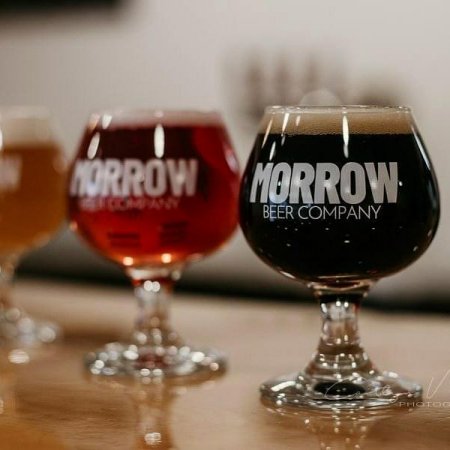 SALMON ARM, BC – A new brewery that has been in the works for several years is now open in Salmon Arm, a city in the Southern Interior of British Columbia.

Morrow Beer Company has been founded by Adam and Genean Morrow, a couple who met in Victoria when Adam was experimenting as a homebrewer. After he spent time working at a few breweries, the pair relocated to Salmon Arm –  Genean’s hometown – in order to establish their own brewery.

Located in a former butcher shop that has been under renovation since early last year, Morrow Beer Company officially opened on March 13th with a starting line-up that includes Endeavour Hazy Pale Ale (5.2% abv), In Waves IPA (6% abv), and Murphy Stout (5.5% abv). All three are on tap for 5 ounce tasters (the serving limit under the current license) and growler fills, with the Pale Ale and IPA also available in 473 ml cans to go.

The tasting room doesn’t feature a kitchen or food menu, but Carried Away Taco Truck was parked outside on opening day, and other food trucks and pop-ups are planned to take place in the future.

Morrow Beer Company is located at 470 Lakeshore Drive West in Salmon Arm, and is open Thursday and Friday from 3:00 PM to 7:00 PM, and Saturday from 1:00 PM to 7:00 PM. For more details, see the brewery’s website, Instagram account, and Facebook page.