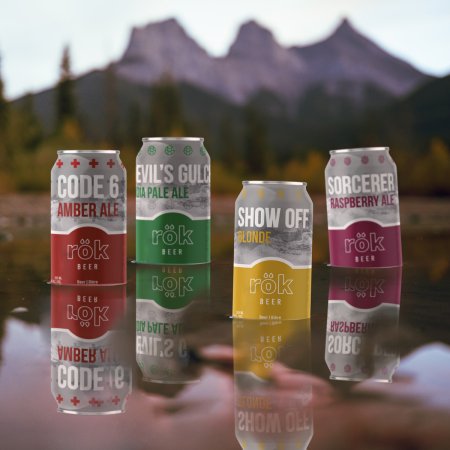 CALGARY, AB – rök Glacier Water, a company that debuted its canned sparkling and still glacier waters earlier this year, has announced the launch of a new series of beers brewed at Rapid Ascent Brewing.

The rök Beer line-up is described as follows:

Together with Rapid Ascent Brewing, rök has crafted an array of crisp alpine beers using water from the outflow of a subterranean rock glacier deep beneath the peak of Fortress Mountain. As the only commercially available rock glacier water beverages in the world, rök is committed to exceptional stewardship of the land its water is sourced from and environmental responsibility remains paramount across all of its operations.

rök beers will be available in four varieties: Show Off Blonde Ale, Devil’s Gulch IPA and Sorcerer Raspberry Ale, named after some of Fortress Mountain’s most iconic ski runs, and Code 6 Amber Ale, conceived as a tribute to the brave members of Mountain Patrol.

In addition to the beers, rök will also be launching a line of hard sodas produced with glacier water, premium vodka, and real fruit.

rök beers and vodka sodas will be available soon at select retailers and licensees in Alberta and Ontario. For more details, see the rök website.