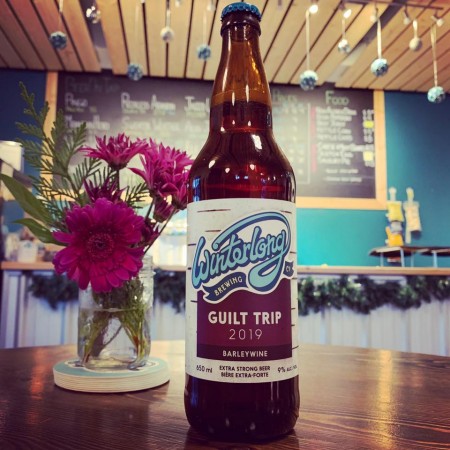 WHITEHORSE, YK – Winterlong Brewing has announced details of a trio of new and returning beers that will be available this month.

Out today in 650 ml bottles is the 2019 vintage of Guilt Trip Barleywine (9% abv), which is described as follows:

Just like Christmas, this beer comes once a year and is revered by hop heads and malty-beer lovers alike. Enjoyed fresh, this beer features a huge dry hop blast of Galaxy, Simcoe, Amarillo and Columbus. As the beer ages the hoppyness subsides and gives way to malty flavours of toffee, raisin and prune.

Currently on tap at the brewery and other select locations is Elf Central (4.5% abv), a “refreshing, lightly spiced, Belgian wheat beer brewed with coriander and cardamom, along with a witbier yeast.” $2 from each large growler fill and $1 from each small growler & crowler fill will be donated to the Whitehorse Firefighters Charitable Society’s Share the Spirit Yukon campaign, which raises funds for families in need each Christmas season.

For more details, see the full announcement on the Winterlong website.