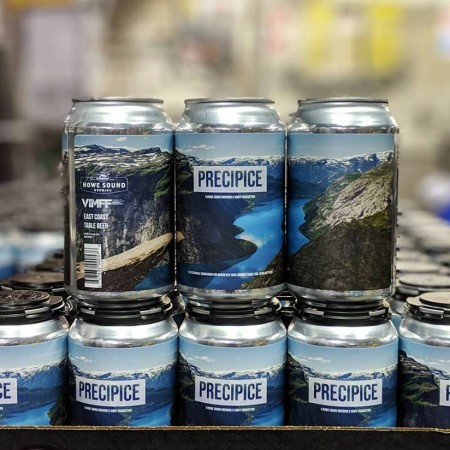 SQUAMISH, BC – Howe Sound Brewing has announced the release of a new beer created in collaboration with the Vancouver International Mountain Film Festival.

Precipice (3.4% abv) is an East Coast Table Beer, a new take on the Belgian table beer tradition that is described as follows:

Our interpretation leaps firmly into the new world, and serves to bridge the gap between historical table beers and hazy IPAs. It features a hop combination of Citra, Idaho 7, and Enigma. The aroma presents a tropical wave, with pineapple, mandarin, and citrus all coming through, as well as an underlying dank ripe fruit character. This is reflected on the palate, and is joined by stone fruit and melon, finishing with a slight bitterness and soft carbonation.

Precipice is available now in 4-packs of 355 ml cans at Howe Sound and select private liquor stores in British Columbia.