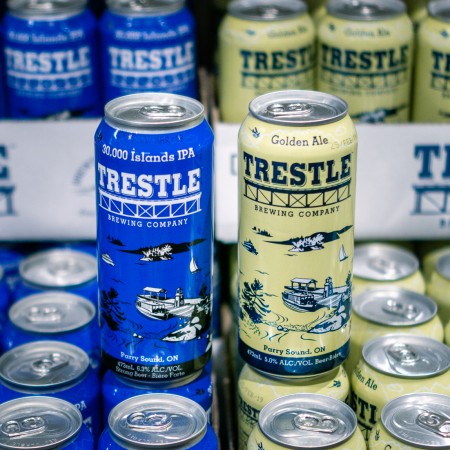 PARRY SOUND, ON – Trestle Brewing has announced the release of a new beer that is branded in partnership with the Georgian Bay Biosphere Reserve.

30,000 Islands IPA (6.3% abv) is named after an archipelago in Georgian Bay that has been designated as a World Biosphere Reserve by UNESCO. It’s described as follows:

Our 30,000 Islands IPA is a new school interpretation of the IPA style. It is soft and resiny with a big tropical fruit profile featuring notes of pine, pineapple and passion fruit. It’s neither an East Coast nor West Coast style IPA as it takes its inspiration from both. Think of it as an East Coast of Georgian Bay kinda beer…

30,000 Islands IPA is Trestle’s second flagship brand, joining the previously available Trestle Golden Ale. It’s available now at the brewery and the Perry Sound location of the LCBO, and will soon be available at other select LCBO and grocery stores throughout Ontario.