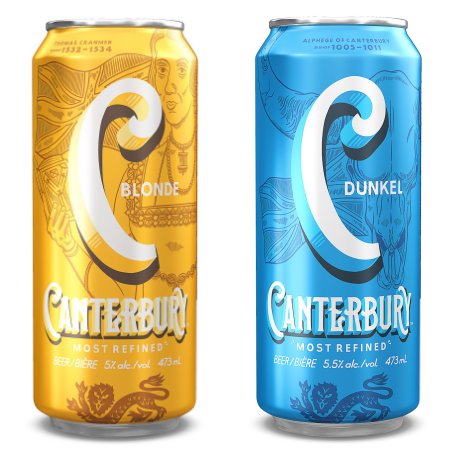 PRINCE GEORGE, BC – Pacific Western Brewing has announced that its iconic Canterbury Dark Mild will soon be joined by two companion brands.

Canterbury Blonde (5% abv) is described as having “a slight fruit flavour and a light golden blonde colour,” and Canterbury Dunkel (5.5% abv) is a “dark reddish brown beer [that] offers a smooth malty flavour and features Hallertau and Summit hops”.

The new beers are being released in conjunction with a refreshed look for the original Dark Mild, with each paying tribute to a different historic Archbishop of Canterbury:

In English history one Archbishop of Canterbury stands out above all others, the saintly Thomas Becket. And, now he stands out on PWB’s new packaging of its classic Dark Mild. The new Canterbury Blonde celebrates another great Archbishop, Thomas Cramner, and the dark Dunkel pays homage to Archbishop Alphege, a valiant Canterbury hero who died in 1011 defending his flock.

Canterbury Blonde and Canterbury Dunkel will be available soon in 473 ml cans at liquor stores throughout British Columbia.