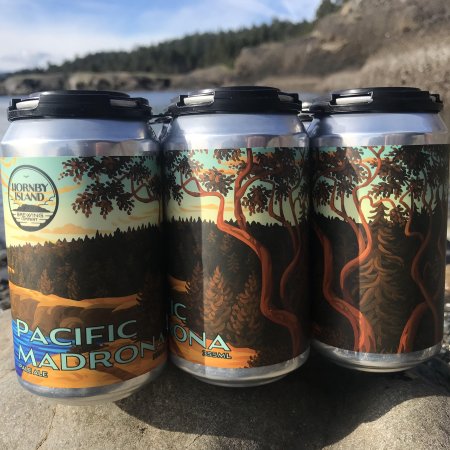 HORNBY ISLAND, BC – Hornby Island Brewing has announced the release of its latest small-batch beer.

Pacific Madrona is a pale ale albeit on the lighter side of the style. The 2 row barley was malted on Vancouver Island, with Victory malt, Flaked Oats and Crystal 20L, and honey sourced from Middle Mountain Mead on Hornby Island. Hops are Magnum, Amarillo, Mosaic, and Simcoe. Tastes of honey and biscuit malts, a light lingering bitterness with aromas of ripe tropical fruits, pine, and citrus. It is a beer for all seasons like our favorite tree, the Arbutus, which is also known as the Pacific Madrona.

Pacific Madrona is the second beer release from Hornby Island Brewing following last year’s Beach Wheat Ale. Both were brewed under licence at Small Block Brewery in Duncan, where Hornby Island founders Ashley and Bree Stotts are having their beer produced while planning for a small bricks-and-mortar location on their company’s namesake island.

Both beers have also featured artwork by local artist Dana Statham on their labels, with the painting on the Pacific Madrona can entitled “Helliwell Prospect”.

Pacific Madrona Pale Ale is available now in cans at the Hornby Island Co-Op, and on tap at the Sea Breeze Lodge and soon at other locations. It is also being served to passengers on Helijet, a helicopter service that flies between Victoria, Vancouver & Nanaimo.