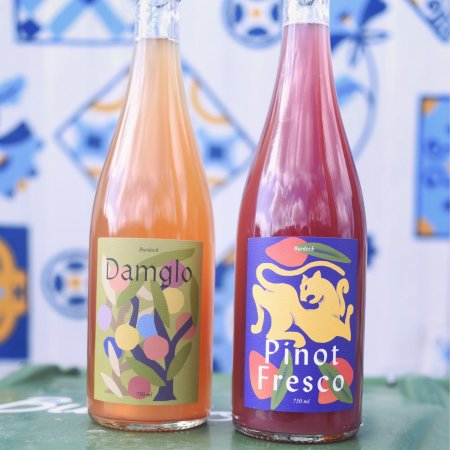 TORONTO, ON – Burdock Brewery has announced details of two new “hybrid beverages” that will be released this weekend.

Damglo (4.5% abv) is a sour beer that was lightly hopped and aged on 500 lbs each of Damson plums and Dolgo crab apples. It’s described as drinking like “a tart skin-contact wine BYOB pool party Spanish sidre where everyone is wearing nice pastels and the vibe is very fun.”

Pinot Fresco (8.3% abv) is a “magic-fermentation barrel aged saison reposed on an inordinate quantity of pinot noir skins from Pearl Morissette.” The resulting beer has “classic notes of candied strawberry and tart cherry, [and] lands in the “hard to believe there’s no actual wine in this” category.”

Both beers will be released tomorrow (March 7th) in a limited number of 750 ml bottles – approximately 1600 bottles of Damglo, and 700 bottles of Pinot Fresco – at the Burdock bar/restaurant, retail store, and online shop.