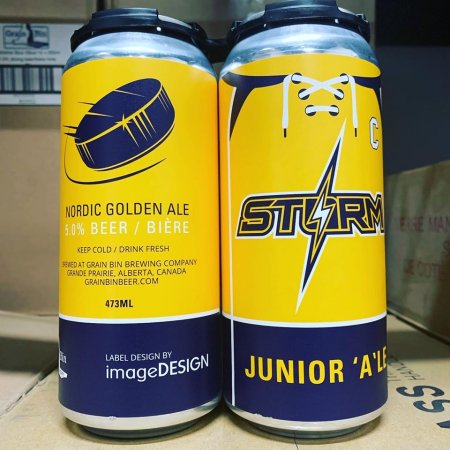 GRANDE PRAIRIE, AB – Grain Bin Brewing has announced the release of a new beer in collaboration with local Junior ‘A’ hockey team the Grande Prairie Storm.

Storm Junior ‘A’le (5% abv) is a Nordic Golden Ale made with a Norwegian kviek yeast, and is described by the brewery as “sweet, easy to drink, and very smooth, something that all beer lovers can enjoy.”

The initial batch of Storm Junior ‘A’le was released at the brewery yesterday (June 17th) and sold out before the end of the day, but a new batch will be available in mid-July. Proceeds from sales of the beer will go to the Storm to assist fundraising for the team’s 2020-21 season.