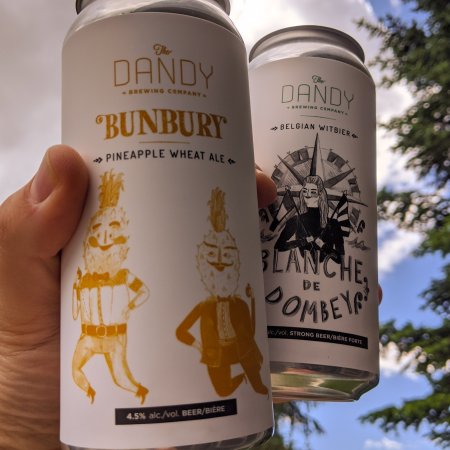 Named for the “friend” who gets you out of social commitments, this fresh and fruity twist on the fan favourite American Wheat Ale will no doubt become your best pal when you need an escape. An aroma of tropical fruit esters amped up with natural pineapple juice is the perfect introduction to a crisp citrusy wheat backbone with tangy hints of pineapple and a touch of sweetness.

Named for the oft overlooked yet genuinely loving Dickens character, this beer is a long awaited one among ownership at Dandy: a classic Belgian wit. Having fallen in love with Cheval Blanc oh so many years ago, Blanche de Dombey is a loving ode to those original Quebec breweries making exceptional Belgian styles in the early days of Canadian craft beer. Aromas of citrus and gentle coriander enhance the light bodied, highly carbonated treat with notes of bright citrus and spice, curacao orange, and jasmine rice.

Both beers are available now at the Dandy tasting room and retail store, and Bunbury will be available at select liquor stores throughout Alberta starting next week.