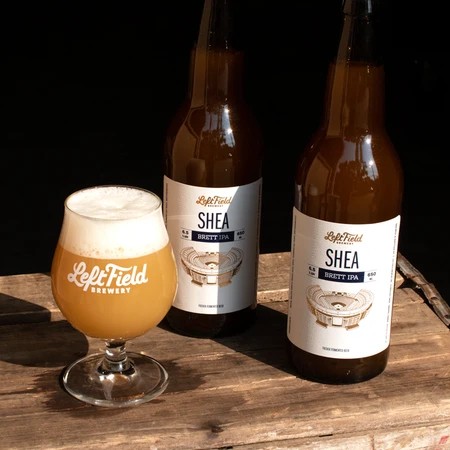 TORONTO, ON – Left Field Brewery has announced the release of a new limited edition foeder-fermented ale.

Bursting with juicy pineapple and bright citrus, Shea Brett IPA is brewed and dry hopped with Ekuanot, El Dorado and Amarillo hops and fermented with Vermont Ale Yeast and Brettanomyces in our oak foeders. Golden in colour, this complex and hazy IPA is medium bodied with subtle flavours of spiced clementine, cantaloupe and hay with a dry finish.

As with all of Left Field’s foeder beers, Shea is named after a famous baseball stadium:

Co-owner Mark Murphy’s favourite baseball player, Nolan Ryan, got his Major League debut pitching for the New York Mets at Shea Stadium in 1966. Mark owns over 300 Nolan Ryan baseball cards, and has loved this hall of famer since he was ten years old. Ryan leads the league in all time strikeouts as well as no-hitters.