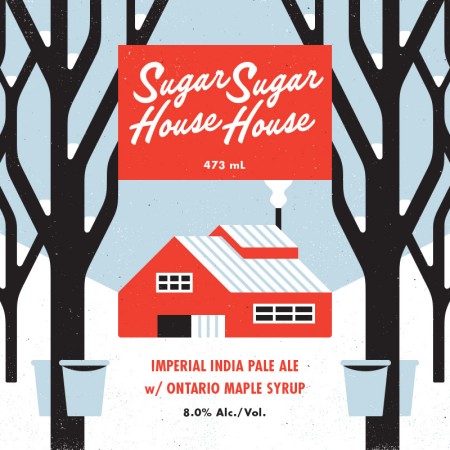 TORONTO, ON – Bellwoods Brewery has announced the launch of the Redux Series, a label under which the brewery will “revisit a curated selection of beers we’ve brewed in collaboration before – highlighting some favourites from the past few years, and in many cases, recreating these styles at Bellwoods for the first time.”

The first Redux release is Sugar Sugar House House (8% abv), an Imperial IPA with Ontario maple syrup that was first brewed in 2017 at The Veil Brewing in Richmond, Virginia. The revised version is described as follows:

We worked closely with The Veil to make some tweaks and edits and considered each ingredient carefully. This version has double the hops (Azacca, Vic Secret, and Mosaic) of the original (though equal the amount of our standard dry-hopping rate), double the quantity of oats and triple the variety (rolled, malted, and golden for lush body, some fermentables, and a distinct toasty granola quality), and a similar ratio of maple syrup (225L of golden Ontario goodness). After a twenty thread, novel-esque email exchange, some good ol’ team work, and several weeks doing the fermentation tango, we’ve got a luxurious, slightly sweet, super aromatic hop bomb with some Canadiana flair.

Sugar Sugar House House will be released tomorrow (October 15th) and will be available at both Bellwoods retail stores and the brewery’s online shop while supplies last.