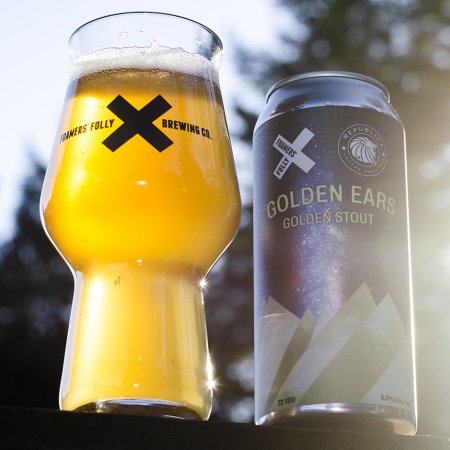 PITT MEADOWS, BC – Foamers’ Folly Brewing has announced the return of a limited edition beer named after a local natural landmark.

Golden Ears Golden Stout (5.8% abv) is a collaboration with Republica Coffee that was originally released a year ago, and is now back for another run. It’s described as follows:

The iconic Golden Ears Mountains embody the beautiful, mystical, and adventurous spirit that British Columbia has become famous for. The mountains helped define our local community and inspired this creation. Brewed with a hefty addition of oats and aged on vanilla, cocoa nibs, and Republica Coffee beans, this beer is light in colour but full in body and flavour. The creamy mouth-feel and rich coffee could fool anyone into thinking this beer is much darker than it is.

Golden Ears is available now at the Foamers’ Folly retail store and online shop, and at select beer retailers in British Columbia.