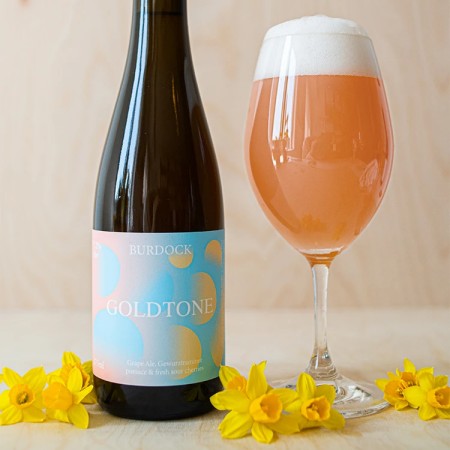 TORONTO, ON – Burdock Brewery has announced the release of a “sour beer that possesses a particularly poppin’ acidity and a palpably floral aura.”

Goldtone (7.2% abv) is described as follows:

Goldtone started out as a “fresh-cherry Cherry-B” meaning we rested a sour beer base on a heap of fresh, unpitted Niagara Montmorency Sour Cherries, but to our dismay, the cherries never burst (we should have crushed them!). In lieu of developing a strong cherry character, the batch turned light pink and smelled like a fresh bouquet of flowers, so we thought “hey, let’s turn up the flowers!

Not having any flowers, we turned to the next best flower impersonator: Gewurtz skins. After about a month of maceration on fresh pressed Gewurztraminer skins and a few months of bottle conditioning, bingo bango bongo – Goldtone was born! Expect notes of pink lychee lemonade, peach petals, and dry white wine… You’re gonna wanna drink this one (kiddy) poolside with a gelato in hand.

Goldtone is available now at the Burdock retail shop and online store.