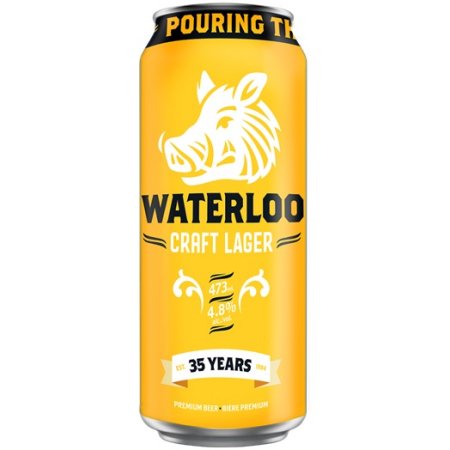 KITCHENER, ON – Waterloo Brewing has announced it is marking its 35th anniversary with a new beer that hearkens back to the brewery’s early days.

Waterloo Brewing was founded in 1984 as Brick Brewing, and initially specialized in premium lagers, a logical choice given the strong German heritage in Kitchener-Waterloo area.

“As our 35th anniversary was approaching we started to reflect on our company’s roots and what motivated the craft beer movement,” said George Croft, President and CEO Waterloo Brewing, in a statement. “Back in the early 80s light beer and straw-coloured lagers were the only options for beer drinkers; nothing with body or full flavour. And many brewers were increasingly using corn, rice and syrup in the brewing process instead of whole-grain malted barley. Those were the two things craft brewers at the time wanted to change.”

Waterloo Craft Lager (4.8% abv) is a premium lager that has been brewed with “only barley, yeast, hops and water; simple, traditional ingredients and no artificial flavour additives [to] help return craft beer to its simpler roots.”

In addition to releasing the new beer, Waterloo has announced that its other core brands – Dark, IPA, and Amber – will be reduced in price at all retail outlets where they are distributed.

Waterloo Craft Lager is available in 473 ml cans at LCBO, Beer Store, and grocery store locations throughout Ontario, as well as at the Waterloo Brewing retail store in Kitchener.