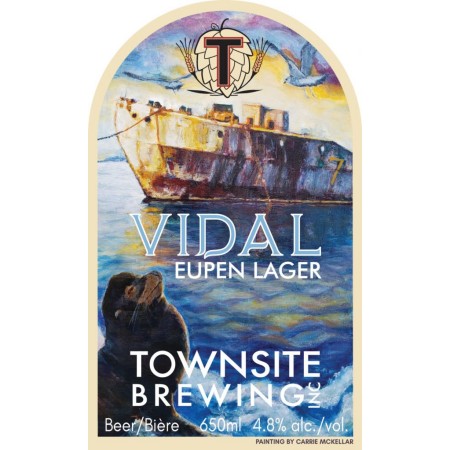 POWELL RIVER, BC – Townsite Brewing has announced the release of the next instalment in a series of beers that pay tribute to a unique local landmark.

The Hulks Series is named after a group of concrete ships colloquially known as “The Hulks” that make up a floating breakwater in the Powell River near the brewery.

For the 8th annual edition, the series offers Vidal Eupen Lager (4.8% abv) which gets the first word it its name from the S.S. Emile N. Vidal, and the second from a German-speaking region in the west of Belgium that inspired brewer Cedric Dauchot to create a unique beer that he describes as follows:

So, what defines an Eupen lager? Well, hops for sure. Peppery, floral hops. Also, bread flavours from the malts. Specifically, it is the colour. It is light, almost airy in colour. Unfiltered too because, Belgium.

Vidal Eupen Lager is available now in 650 ml bottles at Townsite and select private liquor stores in British Columbia for a limited time.