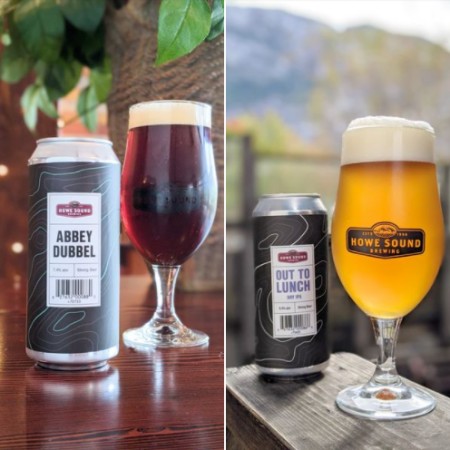 Our homage to the classic Abbey Dubbel pours ruby brown with a dense head. It releases aromas of treacle, chocolate covered cherries, raisin and plum, while also evoking hints of apple pie and ripe banana. The noble hops bring out a spicy finish, with suggestions of fresh ground peppercorns, nutmeg and cinnamon. This is all lifted up and brought together by a fine carbonation that makes it float, silky smooth, over your palate.

A Dry IPA intended to be a counterpoint to many of the sweet Hazy IPAs on the market,⁠ Out to Lunch smells of passionfruit and coconut. As it hits your tongue you taste cantaloupe, guava, and pineapple, with supporting notes of white grape, orange peel, lemon zest, and just a hint of kiwi and sweet cherry. It pours a vibrant gold with a slight haze, but finishes dry with a mild, refreshing bitterness.⁠ It is a beer designed to make you want another, and another, and… it’s 6.9%? Maybe you won’t go back to work after all.⁠

Both beers are available now on draught and in 473 ml cans at the Howe Sound brewpub.