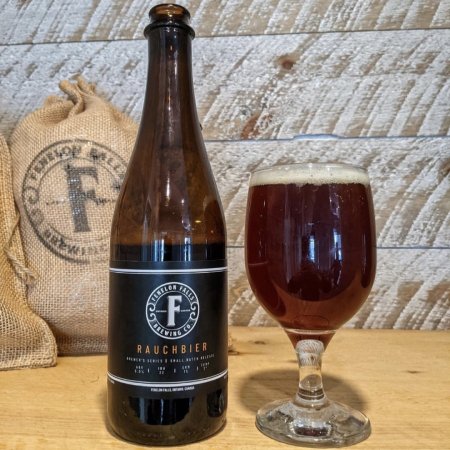 Rauchbier (4.7% abv) is the second of four lagers that are being released on a weekly basis, and is described as follows:

Malts were often produced by local maltsters back in the olden days of continental Europe, and like regional water profiles, played much into establishing local styles. In southern Germany, malts were often smoked carefully over wood fires, imparting that rich smokiness. When prepared, these malts in a brew reproduced that same flavour, with filling tones and sharp contrasts. This is the Rauchbier, or smoked lager. Mashing at the start of this process is always a treat where the smoked malt is mixed with our other grains, producing enticing aromas and succulent toasty notes. A deep red colour is often made with crystal malts, topped off with a crisp, dry fermentation to give a wonderful balance of sweet taste and dry body.

Rauchbier is available now at the Fenelon Falls retail store and online shop., along with the previously released Milkshake Lager. The next two lagers in the Brewer’s Series will follow on March 24th and April 2nd.