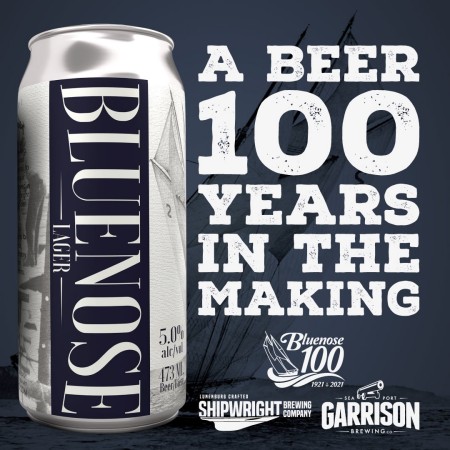 HALIFAX & LUNENBURG, NS – Garrison Brewing and Shipwright Brewing have announced the co-release of a beer to mark the 100th anniversary of the launch of the original Bluenose schooner,

Brewed concurrently at the Garrison and Shipwright breweries, this beer highlights the hard work, determination and tradition that embodied both the building of the Bluenose in 1921 and continues today in craft brewing. The idea came from discussions between Adam Bower, owner of Shipwright Brewing, The Grand Banker and Brigantine Inn, and Brian Titus, President of Garrison Brewing. “We were aware of the important milestone but wouldn’t consider doing anything without a strong Lunenburg partner” said Titus. “Then Adam called, and the pieces quickly fell into place.”

The next step was to craft a special beer, and Brewmasters Daniel Girard (Garrison) and Kellye Robertson (Shipwright) quickly developed the recipe for a German Helles-style lager. “We wanted a bold, traditional lager with a crisp but light bitterness from German Hallertau hops” said Kellye. “Daniel and I have worked together many times so I knew the results would be smooth, refreshing and perfect for celebrating the undefeated champion, dubbed the Queen of the North Atlantic”.

Bluenose Lager will go on sale tomorrow (Friday April 16th) at both Garrison locations and private beer retailers in Halifax, and Shipwright Brewing and the Grand Banker Bar & Grill in Lunenburg. Distribution to NSLC locations throughout Nova Scotia will follow next month.

Partial proceeds will go to support the Bluenose 100 committee, which will be holding events throughout 2021.