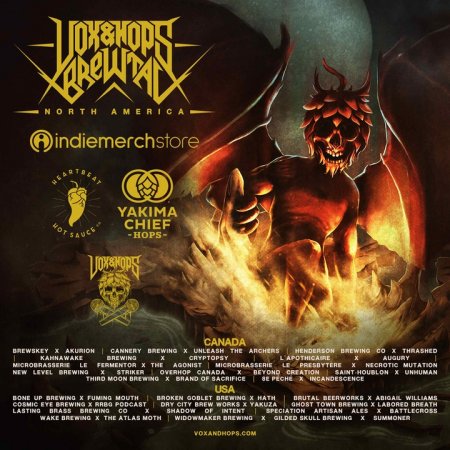 MONTREAL, QC – Vox&Hops Metal Podcast has announced the launch of Brewtal North America, a series of metal-inspired beers from breweries across the continent that were created in collaboration with bands and other guests who have appeared on the podcast.

Of the 22 beers being released in the series, 12 were brewed here in Canada, including the following collaborations:

The Vox&Hops Metal Podcast is hosted by Cryptopsy vocalist Matt McGachy, and features “interviews with fellow metal musicians about their life and music while sharing a craft beer.” More than 260 episodes have been released and listeners have tuned in from over 85 countries since the podcast was launched in 2018.

The Brewtal North America beers are being released throughout this week (June 21st to 25th) at their respective breweries. For more information see the full announcement on the Vox&Hops website, and contact the participating breweries for full release details.