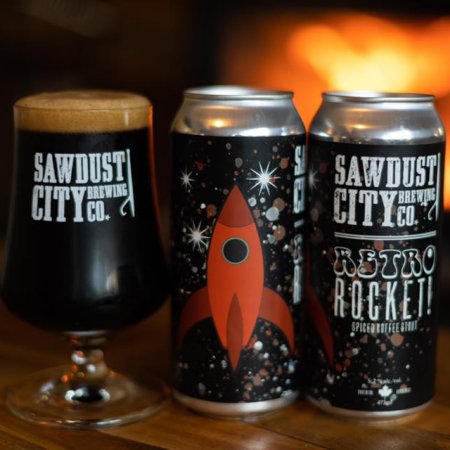 GRAVENHURST, ON – Sawdust City Brewing has announced a throwback to a favourite beer from the brewery’s early days the 44th of its 52 weekly beer releases for 2019.

Retro Rocket Spiced Coffee Stout (5.2% abv) is a renamed revival of the long-retired Red Rocket Stout, and is described as follows:

We took our stout’s big roasted malt flavours and brewed in a sinful combination of cinnamon, vanilla, cayenne pepper and plenty of cold brew coffee from Station Coffee. We created a delightfully creamy, rich stout with the spiciness of cayenne balanced out by the softer side of the cinnamon and vanilla flavours.

Retro Rocket will be released on Thursday, October 31st in 473 ml cans at the Sawdust City retail shop and online store.